10 Foods to Avoid that Cause Cancer 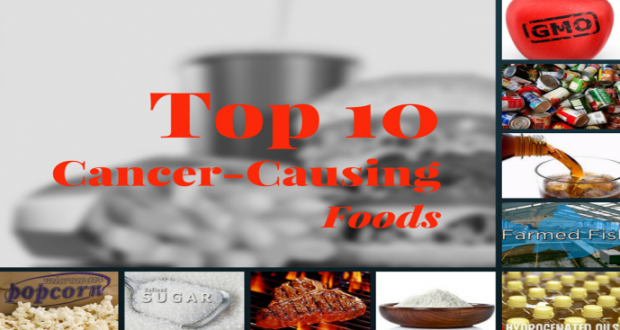 Posted by: Ty Bollinger in Alternative Cancer Cures, Detox, Health, Prevention, Ways to Prevent Cancer 0
Cancer is a disease that you should never take lightly. There are cases where it strikes quickly but often, cancer manifests after years of specific habits. Good examples of this are smoking and overexposure to ultraviolet rays, which result in lung cancer and skin cancer, respectively.
Experts estimate that more than half the cases of cancer diagnosed in the United States – more than 1.6 million in 2014 – are preventable with lifestyle changes.
There is one area of your daily life that dramatically affects your – and survival – of cancer. The food and beverages you consume, the fuel your body uses to fight disease, is critical to your overall wellbeing. Some foods are worse for you than others and could be increasing your risk of many conditions and diseases. While cancer is one of the worst, regularly eating the foods in our top ten list can also lead to heart disease, diabetes, and chronic inflammation.

1. Genetically Modified Foods (GMOs): The rapidly growing industry of genetically modified crops are infiltrating our food supply at an alarming rate. More than 90% of our corn and soy are now genetically modified. This fairly new practice is the source of many debates. Experts agree that adequate testing was not done before GMO foods were added to the ingredient listing of thousands of products. Look for GMO-free labels whenever possible. See our exclusive report on the dangers of GMO foods.
2. Microwave Popcorn: From the chemical-lined bag to the actual contents, microwave popcorn is at the center of lung cancer debates around the world. Not only are the kernels and oil likely GMO (which the manufacturer does not have to disclose), but the fumes released contain diacetyl, which is toxic to humans.
3. Canned Goods: Most cans are lined with a product called bisphenol-A (BPA), which has been shown to genetically alter the brain cells of rats. Many plastic goods, thermal paper, water lines, and many dental composites also contain BPA.
4. Grilled Red Meat: While grilling tastes delicious, scientists have discovered that preparing meats in this way – especially processed meats like hot dogs – releases a carcinogen called heterocyclic aromatic amines. When you grill red meat to the point of well-done, it changes the chemical and molecular structure of the meat.
5. Refined Sugar: The biggest threat is high-fructose corn syrup (HFCS) but even brown sugar is highly refined white sugar with some of the removed molasses added back in for flavor and color. They are the source of major insulin spikes and feed the growth of cancer cells. Since the majority of the sugar supply in the U.S. is made using genetically modified (GMO) sugar beets, a healthier option is organic honey, coconut sugar, or maple sugar.
6. Salted, Pickled, and Smoked Foods: These products typically contain preservatives, such as nitrates, which are intended to prolong shelf life. The additives used in processed foods can accumulate in your body over time. Eventually, such toxins cause damage at the cellular level and lead to diseases like cancer. When smoked foods are cooked at high temperatures, the nitrates are converted to the much more dangerous nitrites.
7. Soda and Carbonated Beverages: Sodas have been at the center of the health debate for two decades. Filled with high-fructose corn syrup (HFCS), dyes, and a host of other chemicals, they are very bad for your health. They provide zero nutritional value and can rob your body of the nutrients you get from other foods. Adding “diet” to the label means you’re also consuming aspartame – and that is no better than rat poison.
8. White Flour: When flour is refined, all nutritional value is removed and then it is bleached with chlorine gas to make it more appealing to consumers. The glycemic index for white flour is very high – meaning it spikes your insulin levels without providing nutritional fuel. Carbohydrates are converted to sugars by your body, so excessive products that contain white flour can lead to increased insulin resistance.
9. Farmed Fish: Commercial fish farming involves raising an incredible number of fish – such as salmon – in a crowded environment. 60% of the salmon consumed come from a farming operation where they are treated with antibiotics, pesticides, and other carcinogenic chemicals. They also do not contain as much omega-3 as wild salmon.
10. Hydrogenated Oils: Vegetable oils are chemically extracted from their source, then they are chemically treated, and then more chemicals are added to change the smell and taste. They are packed with unhealthy omega-6 fats and have been proven to alter the structure of our cell membranes.
Any food that is listed as “diet,” “light,” or “fat-free” should be avoided. In order to remove fat or natural calories, they are replaced with chemicals that are dangerous to your body. Instead of eating food that manufacturers profess is “good for you” – add organic fruits and vegetables, grain-fed meats, and organic dairy products.
Small changes will change how you feel (and look) from the inside out. Now that you know what the top cancer causing foods are, isn’t it about time to choose healthy food ingredients?
- See more at: http://thetruthaboutcancer.com/cancer-causing-foods-2/#sthash.UDA0mkvW.dpuf