1. We spend big bucks to reach your kids

The growing prevalence of obesity, diabetes and other food-related health problems in the U.S. has arguably made us much more aware of what we eat. But the snack-food industry remains a major economic force. Over the past five years, the industry has grown at an average annual rate of 3.8%, and it will rake in an estimated $34.6 billion in sales this year, according to research firm IBISWorld. An IBISWorld report calls the industry’s future “promising” and notes that the improving economy will likely “lift both domestic and foreign demand for snacks.”

One key to snack food makers’ success: Ubiquitous and effective marketing—especially in campaigns aimed at children. The U.S. food and beverage industry spends $1.79 billion a year marketing to youth, according to data published by the Federal Trade Commission in 2012, with $1 billion of that directed to children ages 2 to 11 and the rest to adolescents ages 12 to 17; 72% of that money is spent to market carbonated beverages, cereals and fast food.
Research suggests that these messages work. A study published in 2012 in the Archives of Pediatrics and Adolescent Medicine found that for every hour of television children watch, they are 18% more likely to eat candy and 14% more likely to eat fast food (and interestingly, also 8% less likely to eat fruit).


Christen Cooper was shocked when her son, then 2, pointed to the Dunkin’ Donuts logo and called it out by name. As a registered dietitian and founder of Cooper Nutrition, a nutrition counseling firm in Pleasantville, N.Y., Cooper says she talks to her son about healthy eating and limits his television time, but the messages from marketers still infiltrate. “He demands fruit rollups and sugary cereal,” she says. “He learns a lot of it from TV.”

2. Our ingredients have a big ick factor…
Consumers often don’t realize what’s in their snacks—and sometimes those ingredients are rather unsavory. One ingredient that’s surprisingly common: The carcasses of ground-up, boiled beetles, which are often used in snack foods to create those lovely shades of red, purple and pink in fruit juice, ice cream and candy. “It’s a common colorant,” Ann-Arbor-based physician James Baldwin explains. In rare cases, the crushed beetles can cause anaphylactic shock—but in general, they’ve been approved and deemed safe for use in foods by the Food and Drug Administration.

That said, you won’t find the word “beetle” anywhere on food labels; instead, you’ll likely see the less cringe-worthy “carminic acid” or “cochineal extract.” And the beetle remains are big business. Peru, the largest exporter of cochineal extract in the world, produced more than one million pounds of the dyestuff last year, substantially more than it did a few years back, according to historian Amy Butler Greenfield, the author of “A Perfect Red,” which examines the history of the product.
Beetles aren’t the only I-dare-you-to-eat-that items you may have unknowingly noshed on. Vanilla-flavored items like cookies and cakes are sometimes flavored with castoreum, a secretion from a beaver’s behind (technically, from a sac near his anus called the castor sac), explains nutritionist Mira Calton, the co-author of “Rich Food Poor Food.” This secretion, which the FDA also deems safe, has been used for decades, though it has become less common recently because it tends to be more expensive than vanilla extract. 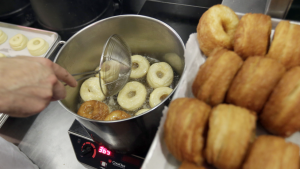 Azodicarbonamide, or ADA, is found in roughly 500 packaged foods made by more than 130 brands, according to the Environmental Working Group, a food-safety and environmental advocacy organization.

Food makers use ADA in snack foods like cupcakes, cookies and crackers to improve their texture--but it’s also used in yoga mats, flip-flops and other plastic products. While it’s legal to add ADA to foods here in the U.S. (as long as you stay below 45 parts per million), ADA is banned in the European Union. Opponents of ADA cite research connecting the compound to respiratory problems and allergies; defenders of ADA say that it is safe in the small quantities used in foods in the U.S.
Another product Americans eat that’s banned elsewhere: Recombinant Bovine Growth Hormone, or rBGH (commonly sold under the brand name Posilac). The product, a synthetic hormone injected into cows to stimulate milk production, pops up in many dairy-based snacks like ice cream. But in the EU and Canada, it has been banned, amid health concerns for both cows and humans, including fears that a hormone associated with cancer might be elevated in people who drink milk treated with rBGH. (Eli Lilly, the company that manufactures Posilac, says that the substance is “a safe, proven and sustainable technology” and that its safety has been affirmed by more than 50 countries world-wide.)

We’ve all chuckled over the urban legend that a Twinkie will stay fresh forever. Turns out, that’s not so far-fetched. Highly processed foods can remain edible well beyond the expiration date on the package, says Karen Duester, president of the Food Consulting Company, which advises companies on food labels and FDA regulations. In fact, if the product is well-sealed, kept away from light, and has a low-fat and dairy content, it could last for years. That’s particularly true for canned and bottled snacks and foods. Foods like highly processed crackers and cookies (put them in the toaster if they seem stale) or soda could last far past posted expiration dates.

“Best by” dates are provided voluntarily by the manufacturer. Why do they even bother? It encourages retailers to restock—and reorder—the product more often, says Duester. Plus, an expiration date pegged to, say, 2018 isn’t exactly appealing to customers.

5. Our factories could be filthy
Each year, an estimated one in six Americans gets sick, 128,000 are hospitalized and 3,000 die from consuming contaminated foods and beverages, according to the Centers for Disease Control and Prevention. And a number of these incidents are the result of filthy conditions in food manufacturing plants.


And these are just the cases that have come to light publicly. The FDA does not inspect every food manufacturing facility each year—even among those that it thinks are at a high risk of transmitting food-borne illnesses to consumers. In fiscal year 2011, the most recent year for which figures are available, the FDA deemed 22,325 food facilities as high-risk, but it inspected fewer than half of those (11,007) that year and only 8,023 in 2012. 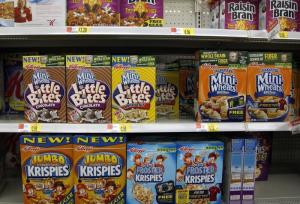 6. ‘Caution: Contains arsenic’
Extensive exposure to arsenic has been linked to cancers of the bladder, lungs, skin, kidneys, nasal passages, liver and prostate, according to the Environmental Protection Agency. But few people realize that the substance can be found in many snacks, even some considered healthy.
The toxin, which occurs naturally, is absorbed by plants from soil and water. It’s present in trace amounts in many grains, fruits and vegetables, but it appears in particularly high levels in rice—which is replacing wheat in some snacks as manufacturers offer more gluten-free options.

A recent investigation by Consumer Reports found that rice breakfast cereals (even organic varieties) contained arsenic, as did apple and grape juices (an FDA study also found arsenic in apple juice). Last year, the FDA for the first time issued guidelines for allowable levels of arsenic in apple juice and suggested that consumers diversify their diets to place less of an emphasis on rice. (For many, this means limiting consumption of snack foods like rice cakes and crackers, as well as rice milk and rice cereals, to only a serving or two a week.)

7. That energy bar may exhaust you
Ads for energy bars often feature athletes in top shape. With brand names that evoke strength, well-being, and the great outdoors, the products cultivate what food experts call “a health halo.” These messages appear to resonate with consumers—the nutrition and snack bar market is projected to grow from sales of $5.5 billion in 2013 to $6.2 billion by 2018, according to a report by market research firm Mintel. “Sales will be mostly driven by demand for healthy foods,” Mintel’s vice president of research, Marla Commons, writes in the report.


But read the ingredients list, and many popular energy bars start to look anything but healthy—and instead more like garden-variety candy bars. They often contain ingredients like high fructose corn syrup, dextrose and fructose—sugars, all—plus chocolate, rice crispies and caramel. “They are highly-engineered sugar delivery systems,” says Dr. Sean C. Lucan at the Albert Einstein College of Medicine. Eating such a snack is likely to give you the kind of immediate burst of energy—also known as a sugar rush—that you’d get from a candy bar. And then you’ll crash, often feeling more tired than before you ate the bar, Lucan says. (And maybe you’ll reach for another energy bar.)

The Agriculture Department, which regulates meat and poultry, defines natural products as those that don’t have artificial colors or ingredients. But the FDA, which regulates other types of food, doesn’t monitor snack-food manufacturers’ use of the word as closely. On its website, the FDA says “it is difficult to define a food product that is ‘natural’ because the food has probably been processed and is no longer the product of the earth.”

As a consequence, “Natural basically has no meaning in food labeling,” says Lucan. Often you’ll see the term “natural flavor” on your snack package, but it doesn’t actually mean “directly from nature.” Chemicals produced in laboratories are more likely responsible for the flavor, Lucan says. “While the same chemical compounds may be found in nature, the ones that end up in your food usually come from a chemical plant—not a living plant,” he says.

Still, natural sells, since many consumers these days are willing to pay a higher price for foods they deem healthier. For example, on grocery delivery site FreshDirect.com a 9-ounce bag of multigrain tortilla chips (it prominently says “all natural” on the bag) goes for $4.29, while the same-sized bag of regular tortilla chips from the same company goes for just $3.29, even though the ingredients are similar.

9. When we say ‘enriched,’ we mean processed
Snack foods like pretzels, cookies and doughnuts often prominently advertise enriched wheat flour as an ingredient. But “enriched” isn’t necessarily good. The term means that vitamins and minerals have been added to the food, but usually only after they’ve first been removed.

The typical food manufacturer’s refining process strips some vitamins and minerals out of the food; enriching it puts back some of the nutrients that were stripped away. “Enrichment really ought to be called ‘partial restoration,’” says Michael F. Jacobson, executive director of the Center for Science in the Public Interest, a consumer-advocacy organization that focuses on health and nutrition. And although the enrichment process adds back nutrients like thiamine, niacin, riboflavin and iron, it doesn’t always add them back in the same amounts; it can also cut out a good deal of fiber, Jacobson says.

10. You may be overpaying for our chocolate.
Consumers’ love of all things chocolate isn’t abating soon. Chocolate confectionary sales grew 24% from 2008 through 2013 in the U.S. alone (global demand is also rising rapidly) and are expected to grow another 14% through 2018 to hit $23 billion, according to Mintel. Sales of individual bars, bags and boxes of chocolate drive that sector, with more than 40% of the market share.

While candymakers say that rising sales are a result of high demand, grocers and other retailers have accused manufacturers of illegally colluding to keep chocolate prices high. Since 2008, grocery chains and retailers have filed multiple lawsuits making that allegation. In the U.S., a federal judge in February dismissed grocers’ claims of price collusion. But in Canada, several manufacturers agreed last year to pay roughly $23 million to settle a class-action lawsuit alleging price-fixing. (The manufacturers have denied wrongdoing in both countries.)

Catey Hill covers personal finance and travel for MarketWatch in New York. Follow her on Twitter @CateyHill.
Posted by Walter Davis at 7:19 PM