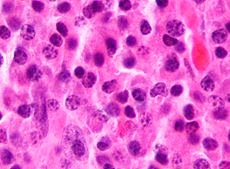 Carolyn and Larry have been told over and over that they only had two or three years to live; yet, they have been able to survive over and over. Multiple Myeloma has a dismal survival rate.

What makes them different? How have they been able to defy the odds? What is it that naturalpathic doctors know that conventional doctors do not?

Carolyn and Larry discuss how Poly MVA is the reason for their survival, 20 years after diagnosis, in the case of Larry. See the link below for their inspiring story. Share it with your family and friends. Also...see the definition from Wikipedia below on Multiple Myeloma and it's specifics.

Multiple myeloma also known as plasma cell myeloma or Kahler's disease is a cancer of plasma cells, a type of white blood cell normally responsible for producing antibodies. In multiple myeloma, collections of abnormal plasma cells accumulate in the bone marrow, where they interfere with the production of normal blood cells. Most cases of myeloma also feature the production of a paraprotein—an abnormal antibody which can cause kidney problems. Bone lesions and hypercalcemia (high blood calcium levels) are also often encountered.


Myeloma develops in 1–4 per 100,000 people per year. It is more common in men and, for unknown reasons, is twice as common in African-Americans as it is in European-Americans. With conventional treatment, median survival is 3–4 years, which may be extended to 5–7 years or longer with advanced treatments. Multiple myeloma is the second most common hematological malignancy in the U.S. (after non-Hodgkin lymphoma), and constitutes 1% of all cancers.
(Source - Wikipedia http://en.wikipedia.org/wiki/Multiple_myeloma . 3 April 2014.)